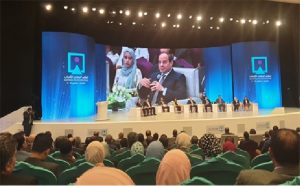 President Abdel-Fattah El-Sisi said on Saturday that dams on the Nile would have never been built was it not for the impact of the 2011 uprising, urging Egyptians not to repeat the mistakes of the past.
President El-Sisi’s remarks in reference to the construction of Grand Ethiopian Renaissance Dam (GERD), which started in 2011 raising Egypt’s fears it could negatively impact its share of the Nile water, came during the session on “The effects of publishing lies in light of Fourth Generation Wars” at the Eighth National Youth Conference.
“In 2011 we were not ready for the major developments that took place… the country moved… however, platforms had already been set up… I stress that the very pure youths who went into motion wanted the best interests of the country,” El-Sisi said.
However, El-Sisi