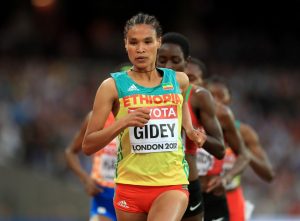 Ethiopia’s Letesenbet Gidey has broken the world 15km record at the Seven Hills Run in the Netherlands.

The 21-year-old finished the race in 44 minutes and 20 seconds. She shaved a staggering 77 seconds off the previous record set by Kenyan Joyciline Jepkosgei in 2017.

The two-time world under-20 cross country champion said of her performance: “I am so so happy to have won here in a new world record. I felt I was in good form in preparation to the NN Zevenheuvelenloop and my legs felt good all race.

“I was quite surprised to see how much time I was able to get off the previous world record to be honest but I had great legs and it was a really nice race. To finish with this result makes me so proud and so happy.”

Earlier this month she won the New York City marathon and showcased an impressive performance at the Doha World Championships. She finished runner-up behind double world champion Sifan Hassan in the 10,000m final.